SparkPeople Members on the Cover & in Woman's World 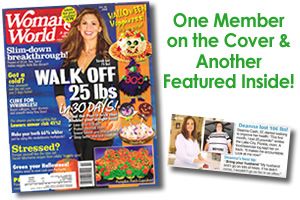 The October 20th edition of Woman's World Magazine features SparkPeople Member TerrahNe (Terrah) on the cover! Terrah is an avid walker and amazing SparkPeople member who has lost over 73 pounds. This is a special issue of Woman's World as it also features SparkPeople member DCash10367 (Deanna) in the same article. Deanna has lost an inspiring 110 pounds! SparkPeople success stories are taking over the world! Hurry up and grab a copy of the magazines as it will be disappearing from newsstands soon. Congrats to both Terrah and Deana!
Share This Post With Others
Report Inappropriate Blog
Member Comments About This Blog Post


Disclaimer: Weight loss results will vary from person to person. No individual result should be seen as a typical result of following the SparkPeople program.