Hungry Games - Through a Child's Eyes 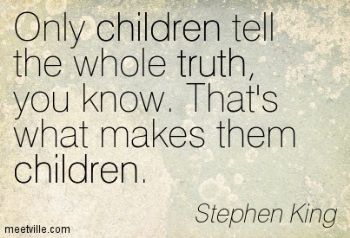 You know the saying only kids and drunks tell the truth? This week I experienced the ability of a child to cut through all the B.S. and head straight to the point.

You see, I have been gifted three incredibly beautiful, bright, and quirky boys. They are ages 12, 6, and 1.5 years old. My middle son is on the Autism spectrum so he especially just says what's on his mind.

I've been actively working to improve my health since mid-January. I've had ups and I've had downs. Since the snow has been gone and I joined the BLC28, I've consistently been dedicated to making life long changes to improve my health. Much to their dismay at times (especially MDS as he gets fixated on his topics of interest), I drag them along on daily walks. I want to set a better example for them and to also help make sure they don't go down the path I have been.

So to the point. We were about a mile or so into our walk when my middle son looks up at me and asks:

"Are you always going to be this way?"

OUCH! My heart stung a little though he didn't say it in a malicious way but rather a more matter of fact way. I stayed quiet for a moment. I've always been fat, even as a child. Could I honestly tell him that I'd change?

For the first time in my life, with complete honesty and confidence, I told him that No, I wasn't always going to be fat. I emphasized that it is more important to be active and eat healthy foods rather than simply being thin. That I have to work very hard to make changes and that he is helping me by being my walking buddy.

And you know what? He believed me. Even more important than that is I believe me.

I never want to be the parent who lies to her child. I'm going to use this short yet poignant conversation as fuel to further motivate me to stay true to the course. It may be a bumpy ride but I'm holding on for dear life.

May the scales weigh ever in our favour,