I started this morning with a 4.5 mile run around the loop. I started later than I'd have liked, it was kind of hot. Our temperatures are soaring again. It wasn't too bad, but I definitely stuck to the sides of the road that had the most shadows. The waterfall at the entrance to the loop had obviously had its chemicals refreshed recently, it looked like someone had poured in a bunch of bubble bath. One clump of suds was about 3.5 ft tlall and looked like a foamy ice berg. So of course I had to stop and take a photo. 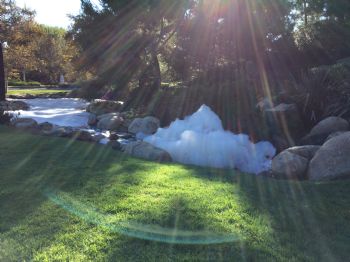 I got home and started cleaning my office. I recently bought a touchpad and decided to move my old desktop tower upstairs for my daughter's exclusive use. At the same time I'm trying to find my physical copy of Microsoft Streets and Trips since it has been discontinued and is no longer supported. If I can't transfer it to my new computer it's stuck on my old computer it'll die when the computer dies. And since it's discontinued 3rd party sellers are now selling it for upwards of $400! It's $40 software! Somewhere I've got my disk and I need to find it. So I've been tearing my office apart and it looks like I've been robbed. Sigh.

In the middle of tossing my office I remembered I needed to go to our local running store. They had an awesome deal for Labor day. Purchase over $20 got a $20 gift card back. Heck yeah! So I jetted over to the store and got myself a new pair of running shoes. I tried one of the Asics on and one of the Brooks (same kind I've been wearing this round) and the Asics were so much more cushion-y. I went for the Asics. I was going to take tomorrow off, but now I want to give them a try for a run so I'll probably run tomorrow after all. -- Okay, I've now committed to showing up tomorrow morning at 0455 for a run with my friend. Ugh!

Anyway, back to my day. As I was arriving at the running store I got a call from my friend's son (my son's friend) asking if David and Beth could go with them to the local trampoline place. I said yes then invited myself along. With my achilles tendinitis I haven't been able to jump for a couple years. So I tagged along and jumped for about 40 mins. I didn't do much other than claim a trampoline square and just jump up and down, but it was a lot of fun. The kids had a great time playing dodge ball or just running up the trampoline slope and bouncing or sliding down. And I got 40 more minutes of exercise.

I'm a little more sore than usual right now, but that's to be expected when I sit still for a while without stretching. I'll fix that.

I had my weekly weigh-in this morning. I was 191.8. I meant to weigh myself after my run just to see the artificial weight below 190 (just for fun), but I grabbed a bottle of Nuun and didn't move for a while. I still saw 190-something before my shower, but that's not quite as much fun as seeing an 8 in the middle of that number. Don't worry, I'm fully aware that any weight I see after a run isn't real. It still would have been fun to see.

Tomorrow I have to get a plumber to our house. My son's bathroom sink (upstairs) keeps filling up with water coming up through the drain. It might be as easy as snaking that pipe, but it also might be a bigger deal, so I'm calling in the professionals. Glad I have tomorrow off anyway, but once again my "day off" is turning into handling an unexpected house hassle.

Good night. My run is in 6.5 hours so I'd better get myself to bed.