So things were actually going along well until yesterday. I pulled into work and just then got a message from a friend. My ex had a personal ad up on Craigslist. Somehow it didn't help that it was in the men seeking men section.

After taking screenshots (because you don't come across something like that without saving the evidence), I sent him the link and asked if that was why he left. I thought for a bit that maybe someone was pranking him. He replied without denying it and said that no, that *wasn't* why he left. But....really? Really?! After all the reasons he's given, that's *not* one? Yeah, I have to call BS right there.

He took the ad down, too. I still have screenshots! He probably wonders how I discovered it so long. He clearly doesn't know my friends and what parts of the Internet they frequent, LOL.

I had to start my shift 40 minutes late because like I said, I got the message *right* as I pulled into the parking lot at work and it shook me up. The boss got me coffee and I had to get a hold of myself.

Yesterday, I was in the anger phase. I had been for a few days and it felt a lot better than other grief phases. It was energizing. Today, I'm just completely exhausted and feeling more depressed. I'm actually trying to go back and find the anger again because it was giving me some momentum to get through life.

A few days ago, the divorce paperwork came in. Ever since the beginning of the month he's been messaging me asking if it came in. I was like no, it takes time to the paperwork to get drawn up and then shipped out. Plus, he doesn't have money for the filing fees (I paid LegalZoom; he's supposed to pay the filing fees), so why the rush?

Anyway in the anger yesterday I sent him a message. I told him to never contact me again. I told him I would get my portion of the paperwork signed and let him know, and then he wouldn't hear from me or see me again.

Just stick a fork in me because I am so done.

I also made a graphic. Which has some angry language. But it really captured how I was feeling yesterday. 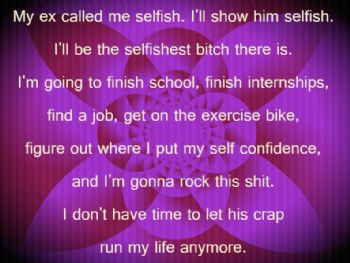