I have just come off a weekend "bender" of the likes I've never encountered! They say in all self help situations that the first step is to admit that you have a problem so here goes:

I AM A COMPETITIVE PERSON! Yes, I've said it and I will OWN it after this last weekend.

I have always been a person that has had a healthy sense of self and where I stood within a competitive arena. Growing up I used to be very athletic naturally and tended to be chosen team captain of everything. This is where I learned many things about others and myself at a very early age.

• All people do not have the same mental or physical abilities and yet that only made them more interesting to me.

• The kid/person who was always picked last should always be picked first as they would play the hardest and enjoy it most.

• The time we took to help each other (and we all needed help in some way) was well worth the time "lost" as it not only helped the one but the many.

And finally, and most importantly,

• It doesn't really matter it you win (so much) as long as you had a good time and put your best effort forward while doing it.
.
So now we get back to my confession. I have a Fitbit Activity Tracker where other wearers can "challenge" you to different goals against yourself and them. These can be for a day, a weekend or even a whole week!

This past weekend I was involved with 6 challenges:

3 WEEKEND WARRIORS – Midnight Friday through Sunday 11:30 pm. In this challenge you compete against yourself at your current level of steps. However you also compete against the other people in your group to see if you can be the top person (or not).

2 GOAL DAYS – Midnight from the night before to 11:30 pm the next day. In this challenge you are definitely competing against yourself while having fun with your friends at the same time.

1 DAILY SHOWDOWN – This is just a competitive face off between people for a day to see who can get the most steps and win the day! Watch out!

I found that my usual level-headed self was quickly thrown aside once I was neck-to-neck with a certain quick stepping New Yorker that had been taunting me and the game was on! I became a competitive BEAST that would not let it go. If he walked 10,000 steps I was already at 10,500 and so on. It was a thrilling game of cat and mouse for two days and I was exhausted all the way to the end. I caught myself nervously waiting for him to sync in his final footfall to see who was going to be the final victor. Previous to this challenge he had "sandbagged" me twice at the very end and sailed away with the virtual trophy.

Now that it was all over and I had time to reflect on my whirlwind of physical activity I began to realize that not only was I a competitive person with others, I WAS FAR MORE COMPETITIVE WITH MYSELF! Now if I could just get a handle on it and tame the beast to keep my workouts on an even keel everything would be great.

Of course this was a wonderful feeling, but it was fleeting. I realized that my personal feeling of accomplishment and self-worth felt ever so much better and lasts a lifetime. 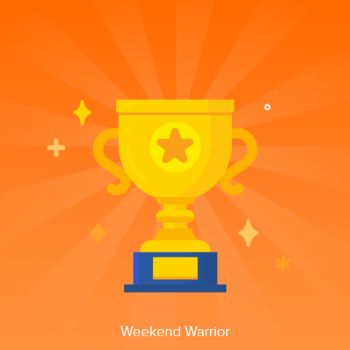