Countless people have asked me this question since I first made my Lynda Carter Wonder Woman costume back in 1980 for Halloween. To keep it simple I gave a pat answer of, "It is a beautiful and well known costume."

To be honest it goes much deeper than that. Wonder Woman was back then (and continues to be) a symbol of the strong, nurturing, protective, patriotic, American woman! I was proud to wear the costume and to act accordingly while wearing it. What started out as a onetime Halloween costume ended up being so much more than I ever dreamed possible.

I painstakingly made the costume to look as identical as possible to the original with make-up, jewellery, boots and a wig. The wig was a must as I had long blond hair. I passed inspection by people who worked on the show and they could not believe how much it resembled the original...even Lynda thought so!

This "onetime" Halloween costume became a sensation -- you see I lived in Los Angeles, CA then -- and people asked me to visit children in the hospital! So began my alter ego as Wonder Woman. For those of you who may be concerned about the lack of costume and children, WW had a full length cape too! LOL. Besides, children did not look at WW with the same eyes as adults. Wonder Woman appeared everywhere for charity for children. She spoke at schools about patriotism, doing the right thing, being nice to everybody, being law abiding, etc.

Parents would contact me to appear at birthday parties gratis. They would use my appearance as a tool to have their child behave or get good grades or Wonder Woman would not come. At Halloween I would wear my costume with cape and open the door real fast so that my cape would fly and all the kids would yell and squeal with delight. Our neighborhood was enclosed and kids were dropped off by the busloads to trick-or-treat. Because of this a lot of little kids knew where Wonder Woman lived and would come by when I was outside doing the lawn and ask if she was home. I would always say, "Sorry, she is out fighting crime right now." The kids would nod with mouths open and say they would come back again and let her know that they dropped by.

My onetime Halloween costume for 1980 I wore for 25 years -- that is right, 25 years! Hard to believe, but I was the same size and shape in 2005 as I was in 1980, just facially older! I decided it was time to retire Wonder Woman for many reasons: a) No one should look at an over 50 WW, and b) I had to have brain surgery which was going to change my life.

So to honestly answer the question of: "Why Wonder Woman?"

She was everything I identified with and strived to be; the quintessential, gentle yet strong, patriotic, scrupled woman that I model my life after. 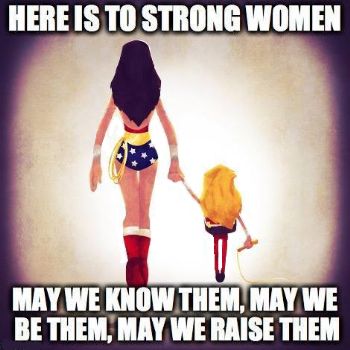