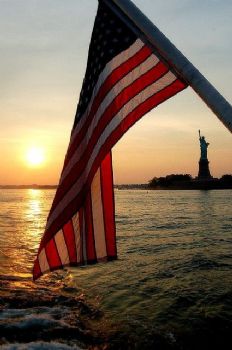 Today is America's 240th birthday. The birthday is significant, because one of the most beautifully written documents of all time, is what we celebrate today. It is called the Declaration of Independence, and showed the intentions of 13 colonies, formally known, through this document as the United States of America, to break off from England, and their oppressive "taxation without representation".

The Declaration of Independence is something that we all should read, and perhaps take to heart. 240 years ago, headed by John Adams and mostly written by Thomas Jefferson, this document signed by Madison, Franklin, Washington, and yes, Hamilton (and many more), submitted a document to England that should bring tears to your eyes, this many years later.

When in the Course of human events, it becomes necessary for one people to dissolve the political bands which have connected them with another, and to assume among the powers of the earth, the separate and equal station to which the Laws of Nature and of Nature's God entitle them, a decent respect to the opinions of mankind requires that they should declare the causes which impel them to the separation.

The Preamble (in part):

We hold these truths to be self-evident, that all men are created equal, that they are endowed by their Creator with certain unalienable Rights, that among these are Life, Liberty and the pursuit of Happiness.