We have finally arrived in Roanoke, VA. That's the good news. We left our hotel on Monday morning at 6:10 a.m. and didn't arrive at our next hotel until 11:44 p.m. - it was a very long day's drive. What should have been about 14 hours of driving ended up to be 17 hours. We have traveled a lot in our years together and have made many trips to Roanoke - this one was by far the most challenging.

I'll bet we've passed at least 1000 construction barrels - you know, those white and orange ones. We have also driven past at least 200 flashing arrows and multiple detour signs. We saw two semi-trailer accidents. The first one we think a smaller car might have passed the semi and pulled in front too soon - the semi was on its side and the car was in pretty bad shape on the back right side. The second was in West Virginia where the semi seemed to have crashed into another car and the semi's entire load was scattered all over the highway. There was the detour that never seemed to end, the road construction through West Virginia where they asked you to merge to the left lane about 2 miles before most of the semi's had to - for a small project that took up about 500 feet. All through West Virginia were multiple small road construction spots with police officers inside the construction zone - not sure what they were doing. In Kentucky we were driving about 70 MPH next to a very large truck and 2 crazy boys on motorcycles drove between us at about 90. Scared the HECK out of me! Luckily, Tom saw them approach and assumed they would do something stupid so he moved way over.

By the time we reached Virginia we were back with the trucks - hundreds of them driving late at night. But we found our hotel, settled in and had about 5 hours of sleep, waking up to a bathroom that was wet. Apparently something was wrong with the plumbing behind the toilet and it was leaking all over the floor and into the room. And the internet didn't work! I could deal with the water on the floor but really, no internet!!!

We had a lovely young woman, Jessica, who helped us get another room as soon as one could be cleaned. We had several large towels for the bathroom floor so we could shower. Once we moved rooms we left to see the kids.

We arrived at Rachelle & Dan's about 11 p.m. to find out that Dan & Faith, who had been in Minnesota for the weekend, were affected by the problem with Delta and were stranded overnight in Cincinnati, Ohio. They were due to return about 2 p.m., if everything worked. Rachelle was also dealing with water in her laundry room. Tom tried to help but we really needed to wait for Dan.

But things improved as the day progressed. Daisy was a hit - at least after little 3 year old Jamie got over the scare when she barked at him in HIS house! Daisy doesn't care - she protects her mom wherever she is. Before long both Reese (5) and Jamie (3) were playing 3 ropes with Daisy. It was so cute how much they enjoyed here. At dinner, Jamie was having a mini-melt down (no nap) and I told him Daisy was so sad that he was crying - he thought about that and stopped.

We went to the Mill Mountain Star and played at the park. They have a large rock the kids could climb and then slide down. There was also a track that the kids could walk around, a sort of mini obstacle course. They loved it - Daisy not so much. Every time the kids came down the slide she barked like crazy. I think it scared her. I'm attaching a few photos. All in all our vacation has been pretty great so far!

This is Faith helping little Jamie on the obstacle course 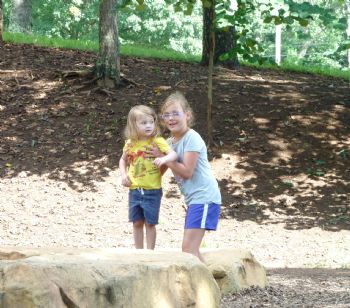 Reese likes having his photo taken, he saw I had the camera and he posed - he looks so much like his Dad! 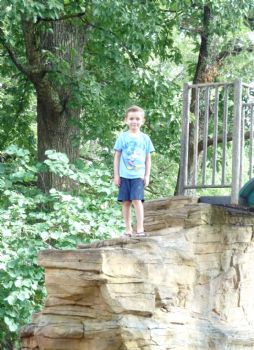 And fun on the slide 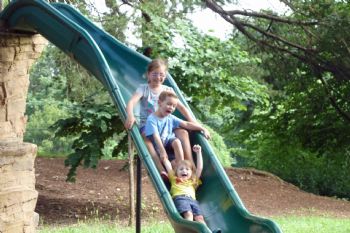 I can't wait to see what tomorrow brings. We're visiting the Transportation Museum and doing the Art Walk where Dan has 2 pieces of sculpture. I've seen the photos but it will be fun to see the real thing. Dan is quite an artist - he also teaches Junior High art classes. I'm so glad we came!
Share This Post With Others
Report Inappropriate Blog
Member Comments About This Blog Post