This has certainly been a challenging trip. Again no internet in the morning and our second room had a bathtub that filled up with water while taking a shower - and I take a pretty short shower. There must have had 4" of water I was standing in when I finished. Tom and I decided to move to the hotel we've stayed at before - they charge $25/day for pets but we needed to be comfortable.

However, the General Manager learned about our frustration and offered us a Suite for 1/2 price, so we accepted. It's a much larger room with a couch and coffee table and lots more room for Daisy. Everything worked perfectly this morning. But the whole internet thing is truly a mystery. I am okay on SparkPeople but I can't link my fitbit, I can access Bing but I can't get into my email. Very strange!

So Wednesday after we changed rooms once again we went to Rachelle's and had a lovely lunch of sandwiches and salad. Little 3 year old Jamie didn't eat with us - he was very angry at his mom for making him wash his hands so he protested on a chair in the living room and promptly fell asleep. While we waited for him to wake up and have his lunch, I sat with Faith & Reese while they made up stories and drew the stories. Both parents are amazing artists and the children are too!

Then Tom and I took all the kids to the Transportation Museum. It actually was quite an amazing place. Upstairs was all about the circus of days gone by - they had miniatures of a circus parade, setting up the big top, a circus performance filled with hundreds of tiny little people. Very cool. Downstairs was a large miniature train display with smaller scenes below, more at the kid's level. They could push a button and watch the trains go round and round. 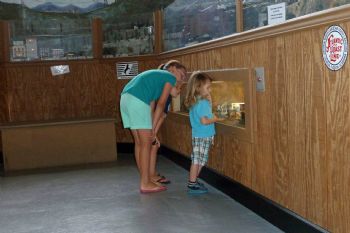 Then we saw some amazing old cars and trucks - the kids weren't as interested in these but Tom and I really enjoyed them. 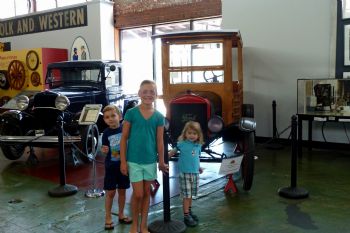 A large train yard with lots and lots of trains - there were only a couple you could go into but the kids found this mini train. 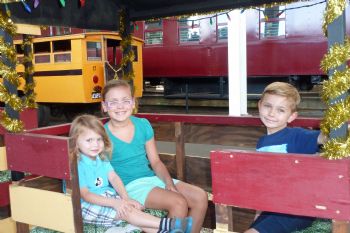 Next we went to the Sculpture Garden where their Dad has a sculpture on display - in case you can't tell, it's titled Leaf. 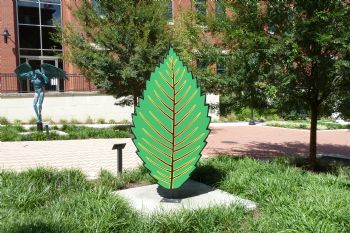 We ended our travels with a trip to McDonald's for an ice cream cone. Went back to the house where the children and I played a Minion Game - they won! Had a nice dinner, had some home-made mini snow cones and Tom and I retired for the night. When we got back to the hotel we finally had full strength Internet! Today is a trip to an orchard but it's going to be a hot one!

It's been a challenging trip but well worth the effort. This is the best visit we've had in a long time. The boys just LOVE Daisy and take her outside several times a day to play 3 Ropes. And Daisy really loves them!
Share This Post With Others
Report Inappropriate Blog
Member Comments About This Blog Post