What a Day today has been

Daisy and I started our day early, I was up by 6 a.m. this morning. The last 3 days has been perfect weather for early morning walking, it's so fresh and cool and NOT humid. We've pushed our walks to just over 2 miles - an increase from our standard 1 1/2 miles. Yesterday the ponds were so still with just a misty cloud above them. We saw a family of ducks - at least I thought it was a family - swimming together, they looked so peaceful. There was dew drops on the tall grasses and when the sun shone they lit up like diamonds; on the ferns of the evergreen trees too. Daisy met a new friend, I think he was a Great Dane. He was so big, probably 3 times her size. But she wanted to meet him and his owner said it was okay. They were nose to nose for a bit, then the big guy moved and little Daisy was scared. He didn't try to do anything, just moved. But I'm sure she thought "if he stepped on me I'd be crushed".

But after our walk things started to decline. We needed to get new tires for our car before we travel to Wyoming at the end of this month. Tom thought if we got to Costco when they opened we could get right in. That didn't happen. Then he found out that the estimate he got about 5 days ago was no longer valid - and the tires went up by about $40. And the kid (maybe 20 at best) tried to talk him into a cheaper tire with a longer warranty. Tom did a lot of research before he decided on what tire he wanted and he knows a lot about cars. We went with his first choice.

While he was doing that I went to pick up my prescriptions that were supposed to be ready by 3 p.m. the day before - they weren't ready!

Then we went over to Wal-Mart to pick up some yarn that I bought on line and had delivered to the store so I didn't have to pay shipping. It reminded me why I rarely shop at Wal-Mart. The sign said someone would be with us in 3 minutes once we tapped the button on the credit card machine - that didn't happen. After 7 or 8 minutes Tom went looking for help. Lesson learned - I'll never do that again.

When we got home we took in the mail and were notified that Tom no longer is eligible for MnSure, which is the state assisted health insurance, which means we have to figure out what to do and how to come up with the additional cost for his insurance, which will probably be substantial.

At this point it felt like since nothing was going my way today I may as well get my hands in the dirt and take care of some more weeds. In the last 3 days I have finally weeded all the front flowers - which hasn't been done in 2 years. Last summer I had a broken foot and never did get to it. It's done now and I will have a lot of work to do come spring, but it looks good now. I have also gotten the back flower garden weeded and am attaching a photo of the last of the flowers - Cosmos and Zinnias. There are Marigolds in the front but they aren't blooming very much yet. The just sparkle in the sunshine and it looks like they are smiling at me! 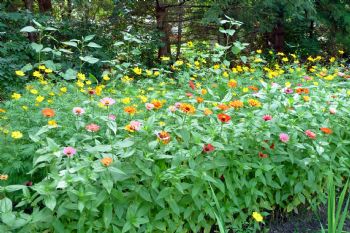 Last I've started tackling the vegetable garden. It just hasn't done well again this year, and I've decided this is the last year. I told my husband and he said "Yeah, right!" I told my daughter today and she also said "Yeah, right!" But I know my limits and I'd rather put my focus on the flowers which bring me joy than on the vegetables that need more work than I have the energy to give them. I love gardening in the spring, and I enjoy cleaning thing up in the fall - but the whole July/August time is not my favorite time to be outside.

I also took the time to put out the solar lights that I bought last April! First the ground was still too frozen, then we traveled to Galveston, then the whole thing with my MIL and her funeral, then the humidity came. All excuses, I know, but the time was right today. I don't think they have been out long enough to charge but maybe tomorrow night I'll see all those pretty lights by my flowers.

So I thought the day would finish up quiet, I came in to watch a little TV and zap - no electricity. I did what every smart person should do when they can't watch TV - I took a nap and apparently needed it. But after 1 1/2 hours, still no electricity. So Tom and I decided to go to our favorite little bar for dinner. We had a lovely waitress who was so cheerful that you couldn't be crabby. We had a delicious meal, as always. And we spent the time "reframing" our day. Tom always got a bit irritated at me when I tried to find the bright side of every problem, but he's now working on "reframing" things - which is essentially the same thing. So here is my reframing:

1) The tires being more expensive - well, we got the tires we wanted and they drive really nice.

2) The prescription not being ready - we had to go back anyway so no big deal.

3) Wal-Mart - I've got nothing on this except think twice before every trying it again.

4) Tom's health insurance - I have a great guy who helped me with my Medicare & Supplemental Insurance, I'm sure he can help us with Tom's. And I will be reducing the level of coverage for myself for 2017 which should help pay the extra for Tom.

5) Electricity outage - we got out for dinner, had a great time, and unplugged for a few hours!

So it was a challenging day but I think we won in the end! Now I'm off to watch a Hallmark movie - you know the ones where they always find true love in the end and their problems are magically solved in only two hours with all the love and support they need from family and friends. I figure why live in Reality when you can spend 2 hours In Hallmark-land!