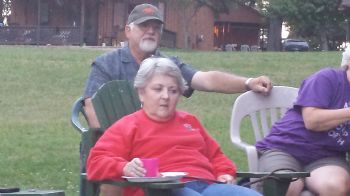 Last year at this time I was committed to exercise 3x a week and a smarter eating plan. I looked and felt better than I had in many years. I got down to a fit 150lbs.. It had been a goal for years, and I had finally attained it.

Then on June 28, 2016 my family received some stunning (is the best word I can come up with) news. My mom, age 76, was diagnosed with gastric cancer. We knew she wasn't well, but all assumed it was something cardiac... quick stent or maybe even a bypass and we'd be back to life as we knew ( and liked) it.

Instead my poor mama, who had been challenged with health issues my entire life, had metastatic cancer, and she wasn't "buying" it. She had far out reached any prognosis for any of her issues and she would do the same with this. She did many of the things that Cancer patients do to preserve their sanity. She denied what she was seeing and hearing at the doctor, went really internal with her feelings and thoughts, got very "short" (to put it kindly) with those closest especially my amazing dad.

She was hospitalized 4x in all, Every stay between 16 and 19 days long, and involving at least half the time in ICU.Her diagnosis and biopsy took that long due to the timing of late June early July (resident doctor change over) and 4th of July holiday.
Her 20 year history of severe hypoglycemia was nothing compared to the sugar issues and crisis exacerbated by radiation and chemo. This resulted in stay number 2, in November.
In January, she developed a blood clot in her toe. The most painful thing she'd ever experienced, and she'd had 3 children, 10 surgeries and a crushed foot from a motorcycle accident. She finally had the toe amputated.
In February, my dad and I went with her to Florida. The sun made her feel better, but not good.
In March , her lung collapsed due to fluid build up.More procedures, word from the doctor that there was nothing medically they were willing to try, that would not make things worse. She agreed that a hospice site was the best choice (she had so many needs by that time she was not a candidate for home hospice) for her, then tried to guilt us into taking her back home.
Finally, on April 9, mom came to grips with her situation and madesome peace with God. She realized that a hospice facility, so much closer to her and our homes, would allow us some more time to be together, and afford her some privacy/dignity that home could not. Her timing was good because on April 10 she was transferred from the hospital to a wonderful hospice facility. She was our mom/wife again. It was amazing, an unbelievable blessing given the preceding 10 months. She died on April 28th.