The victory is that I rallied in the end

I'm purposely not starting by writing a post title to this blog because I'm hoping for something better to come from writing about my lack of blogs this last month and the crummy month September was.  Where do I even start?  September held so many exciting things for me when I reflected on what I hoped for in this past month.  I had a new Jeep, which I loved, and was super excited to take to North Carolina on my trip to see family.  I was a stranger in many ways to some of these family members and I looked forward to getting to know them better.  I had plans to go see a high school classmate who I had not seen since we were seniors and an afternoon of new abandoned places to explore with a friend.  I also knew the temperatures would start to come down into fall comfort and with that, my desire to go for walks and rides would increase.  I do love a fall evening above most things.

Labor Day weekend was the beginning of the excitement.  I was seeing the classmate and going on some abandoned places explores.  At the last minute, both plans fell through.  I tried to put on a happy face regardless and find a way to still have a good weekend.  After all, a week after I would be in North Carolina exploring the back roads with my new Jeep.  Excited for the trip, I made the decision to drive into town and go look for some new shirts.  A short time after arriving, someone came into the store alerting us that a car had just crashed into a Lexus in the parking lot.  One of the girls who worked there quickly said that was her car and rushed outside.  I remember feeling relief that they hadn't hit my Jeep.  But as quickly as the relief was there, it was filled with a horrible gut feeling that something was not right.  Not more than 15 seconds later, the same woman returned to say the white Jeep with temp tags had also been hit.  My heart sank and I went numb.  How could I be having the worst day ever?  The details are lengthy, but the cliff note version is a Tim Hortons employee had taken her manager's leased company vehicle for a joy ride and crashed it into a Lexus that was then pushed into my Jeep.  The Lexus took the worst beating and was totaled.  My Jeep suffered bumper damager and dragging damage to the back wheel.  The driver who hit us was on drugs, had Xanax in her pocket, and was taken to jail for felony drug possession and distribution warrants.  The battle with the insurance companies then began.  My Jeep was in a storage lot for over a week before it moved to a body shop.  Because the Tim Horton's vehicle's manager was trying to claim the vehicle was stolen, it delayed the process with that insurance picking up the bill and threw my life into a tailspin of phone calls, rental cars, missed work hours, and cancelled plans.  I unhappily went through four rental cars during this time because of the switch back and forth between insurance covering and not covering them.  My vacation did happen a week after it was originally planned to and I did make the most of it.  However, it sucked having to drive a vehicle the first leg of the trip that I really didn't like and was not powerful enough to tackle the mountains.  For this reason, I didn't do all the things I planned to do with a powerful four wheel drive Jeep.  The situations with insurance and rental cars stressed the limits of an already difficult relationship with my dad.  It was an added stress I didn't need when I was already dealing with a lot.

With all the stress over my first accident, taking care of myself really became a back burner topic.  While I continued to eat decently well, I gave up on taking walks.  I really just didn't care.  I still have two unopened medals in my dresser.  I'm happy to report that I rallied myself the end of September.  I kept my appointment to see my Endocrinologist and she put me back on the medication I need to take daily to help my body process sugars correctly and put me back on the right path to losing weight.  I managed to get some walks in and even went on a day adventure with a friend to check out Point Pleasant, WV.  It turned into a day of walking and hiking which was good for me.  I also found out today that my Jeep is finally fixed, so I can look forward to taking it home to show my family this weekend.

September sucks, but I feel good about not giving up and coming back from a really challenging month in the end.  My walking partner is no longer working a second job, so she will be able to go back to meeting me after work and on weekends.  Being the beginning of a month, I still need to report numbers, but I think I will wait till tomorrow to be accountable for that.  I feels good to at least gotten the month's owes down on paper so I can move on into October. 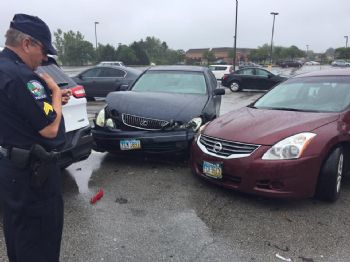