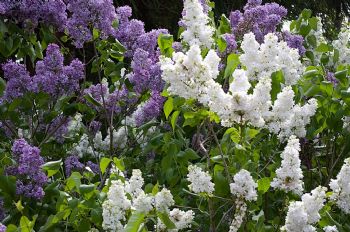 I have several lilac bushes that are in full bloom right now, and they are so beautiful. I try to walk by them each day and stop and smell their wonderful scent. I have a few varieties...the traditional light purple, white, a light pink Moscow, and one called Sensation that is dark purple with a white edge. 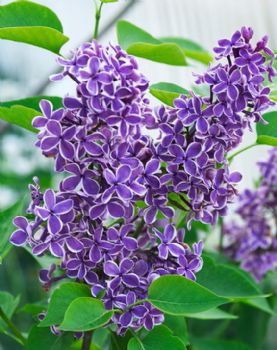 Each time I smell them, I'm reminded of my childhood, because we had a large purple lilac bush in our yard. I remember helping my Mom cut some of the stems to bring inside and putting them in a vase on top of the television, to bring some of that nice fragrance indoors.

Since the lilacs bloom around Mother's day, and they remind me of my Mother, I thought I'd write a blog just to share a few memories of her. Also, since my last blog was about family conflict, I didn't want to leave the impression that my family was always fighting or in turmoil. Probably like most families, we've had our ups and downs. Thinking of my Mom is always a bit bittersweet, because she was truly a loving and caring mother who did her very best for us. But because she passed away when I was barely a teenager, it's hard to think of her without being sad too. Even though that was about 40 years ago...well, it has always made Mother's day difficult for me. And because I never had children, I always dreaded Mother's day a bit. I hate when store clerks tell me "Happy Mother's Day," because I'm not a mother and haven't had a mother for a long time, and I didn't want to be reminded of my loss, which honestly I still feel to this day.

But, I'm trying to change my thinking a bit this year. I am now older than the age at which my mother died. So, when I think that she never lived as long as I have, and I think of all the things she went through in her life, I realize how lucky I really am. She had a lot more trials and tribulations than I had, even though I was orphaned when she died...my father had died when I was 5. But that meant she became a widow when she was in her early 40s. Now that I'm married and older than her, I can't imagine the heartbreak of losing a husband at such a young age. And, she had seven children to raise at the time, the youngest just a year old when she became a widow. My goodness...the strength she had to muster to carry on after that.

Her early life was also difficult. She was born in England, and witnessed World War II. She was in the Women's Land Army. She met my father, an American in the Army stationed in England, at a dance, and became a War bride. My oldest sister was born in England, and then they moved back to America when the war ended. My mother never saw anyone in her family again after moving to America. I think of the courage it must have taken, to leave everything she knew in her native country to come here, live with her in-laws, and raise a family. I remember her telling me how difficult it was to learn the money and making change. Also she faced some discrimination, and people teasing her for her accent. I think of how hard it must have been when her parents died, but she couldn't afford to return back to England for visits or funerals. She would talk on the phone occasionally, but even that was expensive, so maybe once a year. My mother also lost a child of about 4 years old, when he was hit by a car...a drunk driver that drove up onto a sidewalk. It was long before I was born, but I imagine the heartache of that loss. And with seven remaining children, and all that goes along with raising kids, she certainly had plenty of trials and tribulations. All the illnesses, accidents, temper tantrums, school problems, boy/girl problems, etc., times seven...ugh.

But, my mother wasn't one to complain, and that's what I'm remembering the most lately. She was a quiet woman, who was incredibly kind to everyone, and had a good sense of humor. She was very accepting of whatever life threw at her, and just dealt with it. She had a saying that she would tell me when I would complain about something being unfair....she would say, "Life isn't fair, get over it!" And if I look at her life, I can understand that now. Much of her life wasn't fair, and she managed to get over it, and do it with grace.

So when I stop and smell the lilacs, I think of my Mom. I could write so much more, but the bottom line is that she was a kind woman, a strong woman, and a survivor in so many ways. And when I get to feeling that life isn't fair...I need to remember that it isn't supposed to be, and get over it! And then I remember her laugh, her silly songs, and remember that a cup of tea makes everything better too. Stop and smell the lilacs, and be grateful for each day. I've been given more days than her, and she would want me to enjoy them. I so wish she were here to enjoy them with me. 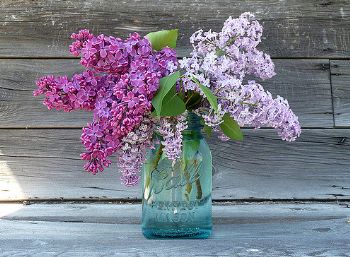