What's In a Name? MAGIC?

Well, it is official -- Hubby and I are VERY blessed and lucky!

We went to Johnny's New Your Style Pizza tonight for dinner with three other couples, having no idea that tonight was Trivia Night. Just as we finished eating the game began. I was suspicious and asked how long it took and what were the prizes and the EMCEE said top prize was $25 in food, second place $15 and third place $10. There were a lot of people in there and I told him I would take a sheet. It had spaces for answers to 40 questions with a Bonus area at the bottom for an additional question and the team wager.

I immediately named our team The Rowdy Rebels (after my beloved 5% Challenge team!) and all but 3 of us retired to the parking lot. The questions were varied and long story short, by the 40th question I was all alone. I thought I had done well, but there were a lot of unanswered questions and a whole lot of guesses! The contest host came around and "locked in" our answers and when the dust settled our team had 17 points -- there was a 30, a 27, a 24, a 23, a 21, two 17s, and a 10. We were tied for next to last! I almost left. He explained that the final question and scoring was designed to "change up" the score and give everyone a chance.

He gave us the names of 5 cities : agave springs, hot springs, pueblo valley, and two others I don't recall. He said the second part of the question was a number.

My hubby had come back in by that time. The question was:

I had written down the names of the cities and my hubby immediately said, "Hot Springs." I wrote that down with the year 1955 and turned it in.

Long story short, He did the calculations, announced that the city was Hot Springs, and the year 1950. He said the Winning team was the ROWDY REBELS and we were first time players who started the bonus with 17 points!

I nearly fell out of my chair! Moral of the Story? Never Give Up Never Surrender!

Just for the record, the only other trivia game we ever participated in was at a local BONZ restaurant and we won the top prize of $30 in food there!

Give it a try! There is Magic in the world! 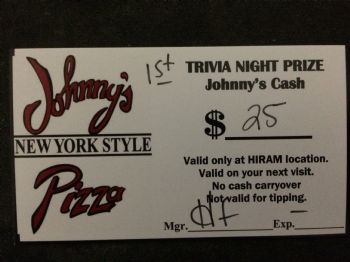