I went on the Summer Solstice Trail Run last month. From the information provided, I knew that they had special awards for runners but I was TOTALLY shocked when I opened the mail and got this: 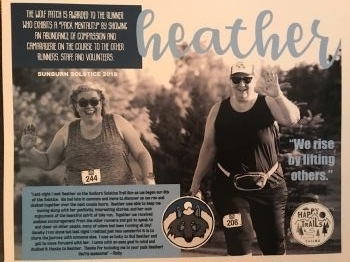 Seems like they selected me for the WOLF AWARD! How fitting is that Wild Wolves Challenge Team! Woohoo!!!! 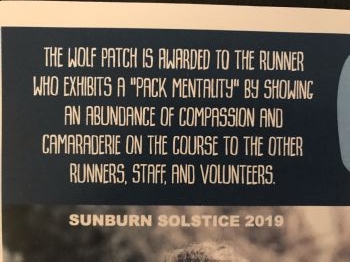 I expected them to pick "real" runners for their awards! First let me say that the Happy Trails Running Club is a FIRST RATE organization with the most awesome people ever! EVERY SINGLE runner who passed us (it was on a big loop) gave us a high five or words of encouragement - every single one. Even though they were trying for awards and personal records, they took the few seconds and used their breath, to speak to us. Over and over and over. Some of these people had been running the trail since sun up - over 15 hours before we got there! That is a classy group of people! Made us feel so at home!

I signed up for the 1/8 Solstice run or 1/8 of the daylight hours. When that section of the race was starting, I went to the back to allow serious runners a good start. I stepped aside to let a couple go ahead and they immediately did the same for me. We agreed to let her hubby run on and we hung back. We had a great pace and chatted the whole 2 hours. It was smoking hot and buggy (trail was around a reservoir) and I am not used to trail running, but we kept on going. I got to know Molly quite well and found that we had a lot in common. I was so glad that we met up by accident. We made a point to run across the finish line for a joint photo, which is what they have on the certificate.

However, I was super touched to see the narrative on the certificate. Seems Molly went and told the club what a great time she had running with me and nominated me for this award: 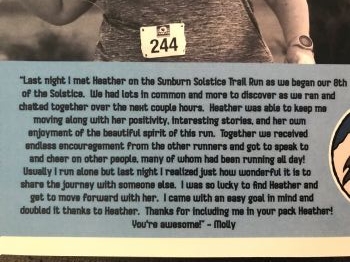 I also got a card from the trail running club and a badge with a Wolf on it! 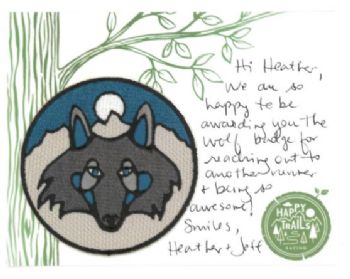 I am still blown away! There will literally 100's of runners at the event. I can't believe that I got an award. Just made my day!

Have an awesome weekend everyone!