Today is Thursday but I'm going to start this blog with events that happened Tuesday.

I had a doctor's appointment on Tuesday afternoon. It was a 6 week check-up from my last surgery. I've been feeling well so I wasn't worried. I had to give a urine sample and there was blood in it! I haven't had that since the surgery. I'm still waiting to hear the test results but figure they would have called by now if anything were seriously wrong.
One good thing about that appointment was the amount of walking involved getting into the hospital and to the office. I used to need a wheelchair but I used my rollator this time. It's a good thing I got those steps in because they were my total for the day!
I came home so upset and down that I just gave up for the day and dove right back into bad habits. I ate and ate and ate. Then I was so upset because I ate so much that I ate more to "comfort" myself! Isn't it strange that we can know what we are doing is not a good choice but we don't (can't) stop ourselves? I didn't come to Spark at all which was another mistake because I needed support and encouragement. I didn't track my nutrition or exercise for Tuesday and am disappointed with myself.
Then, something worse happened. I have my mother's rings and my grandmother's engagement ring. Mom left them to me when she passed. They don't fit my fat fingers but I bought a good chain and wore them as a necklace. It had my mother's original engagement ring my dad gave her when they were both 18 (in 1947). The diamond in it is just a tiny chip but that ring meant a lot to me because I remember it from my early childhood. There was also an expensive diamond wedding set my father gave her in later years. I'll always remember my mother unwrapping a box of rocks from my dad that Christmas. He had told her he was giving her rocks so he gathered some from a neighboring field and put the rings in a small box at the bottom of the box of real rocks. I'll always remember mom's face as she took rock after rock out of the large box. The fourth ring was my grandmother's engagement ring. It was all I had of her. I have no memories of her because she died when my mom was 8 years old. Mom shared things she remembered with me but she was never sure if they were true memories or stories she had been told about her mother. She did remember red geraniums planted around the house so I always plant some red geraniums in my flower beds in honor of my Grandma Flossie (for the past 50 years).
As you can tell, these rings are very important to me. Anyway, to make a long story shorter - the rings are gone. I had not worn them for several months but had put them in a small box. I put the box in my master closet well hidden among other things. I thought they'd be safer there than in my jewelry box. I decided to get them out Tuesday night to see if they were any closer to fitting me and discovered the box was empty. Kari was here so she and I tore my closet and bedroom apart. We looked in every conceivable place throughout the entire condo and no rings. Nothing else is missing. There have been very few visitors here and they don't go in my bedroom anyway. I always keep my doors and windows locked even when I'm home.
I'm just hoping and praying that my memory is playing tricks on me and I put the rings in a "safe place" and have forgotten where. Tuesday was definitely a day of many "downs."
I did not go to bed at all on Tuesday night. I sat up and worried and cried most of the night. I feel like I have let my mom down after she trusted me with her most treasured possessions. I feel sick whenever I think about this situation.

That brings me to Wednesday and a definite "up." I got my first Covid shot! I had been trying to schedule one but had no luck. Kari's son, Jayden, was scheduling theirs and got me in at the same time. One more to go! The rest of Wednesday went okay. I kept looking, but no rings! I was in a lot of pain so didn't walk as much as I should have. I ended up with a little less than a half mile for the day. At first I was upset but then I thought about it. I could only walk about 100 steps 6 months ago so I need to be pleased with the half mile.
I was exhausted and went to bed early, around 11. My cats are used to me being up until 2 or 3 in the morning so I guess they partied while I slept! Things were knocked off every surface - tables, counters, etc. and scattered throughout the kitchen and living room. The paper towels were on the floor and shredded. There were two sealed bags of Temptations on the counter - they were on the floor, chewed open, and empty. Both cats were snuggled up at the foot of my bed sleeping the sleep of the innocent when I got up this morning. Fakers! I woke them up but they only jumped into the wheelchair to continue their nap. 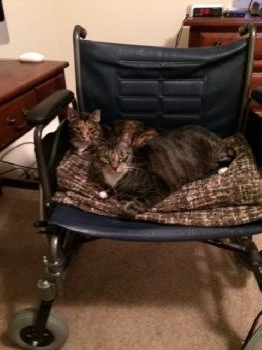 Do they look innocent to you?

Today (Thursday) was an okay day. I ate well and met my nutrition goals. My knees are still hurting so I did a seated exercise video instead of walking. Both of those were "ups" for me. I'm still upset over the missing rings but didn't turn to food. Instead I turned to shopping, a definite mixture of "ups and downs." I got out several catalogues and now have a bunch of stuff that I really don't need coming within the next few weeks. Some of it I really wanted. I got two solar mobiles to hang on my front porch, a large welcome board for the porch, a fairy garden set for my flower garden, a set of inserts that go under a mask to help with breathing and talking, a pair of jeans (the first I've ever owned), two blouses, and a bathing suit (that I'll probably never use).
My younger brother bought my car back. Gee, the car got to go to Hilton Head but I stayed home! My brother's health has taken a turn for the worse. He looks like "death warmed over" and can barely walk. He used the guest room and took a 3 hour nap before he went home. I'm so worried about him and pray every day that he gets the kidney transplant. He now does dialysis 9 hours a day every day.

I started to say tomorrow's another day but it is tomorrow! It's around 12:30 on Friday morning so a new day has started. I apologize for rambling on and on. I guess I just needed someone to "talk" to. Thank you for being here for me.